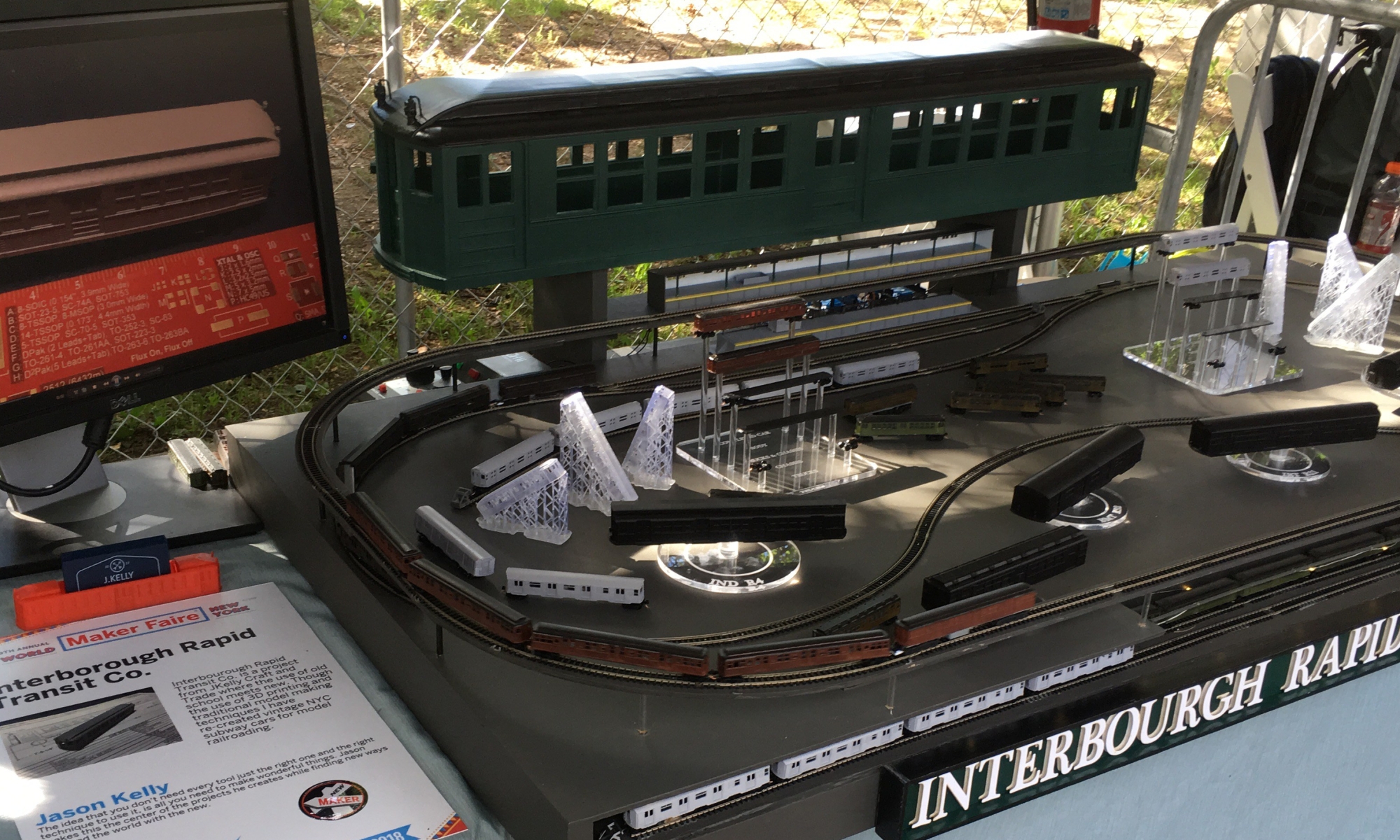 So the last 12 weeks has been a lot of very late nights and being hyper focused on getting the trains done, putting together the layout and making sure I have all the other things in order. Even packing up the car happened at a late hour on Thursday night which meant I still didn’t get a full night sleep before heading out to Queens. However, I hopped in the car on Friday loaded up on coffee and made it to the Hall of Science with out much incident. Setting up was easy and everything thing was set for the crowds on Saturday. 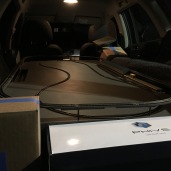 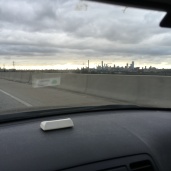 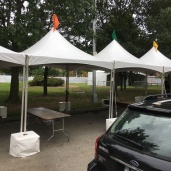 By Saturday morning I was all set. Trains were on the track and running. Display pieces were cleaned off and dusted. Maker coins, business cards and one sheets were ready to be handed out. Five minutes to go and, the micro switches for the pair of trains I had operating by an Arduino stopped working. I was bummed but I thought, I should have time to fix it later in the day. How wrong I was about that. The fair is open, now here comes the people.

The previous 12 weeks had been focused on how things will look, how they will work and how do they present. Until, the first kid on Saturday poked at a train causing it to fall off the track, I had not spent one second on the thought of kid proofing. This now seems like a critical flaw in what I did since every kid loves seeing trains. They really love things that move, and a small train that is new moving is like having a big red shiny button with a sign saying “do not press”. Its going to be pressed.

Despite no kid proofing  I only lost 7 cars the whole weekend to the effects of enthusiasm and gravity. Which in the grand scheme of things is not that bad, heck you can just print a new one, right? 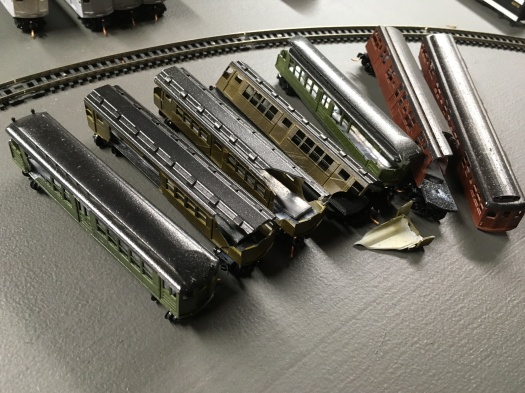 I am not sure what my expectations where for presenting at Maker Faire. I think I was going to be happy that I just made it there and  the level of craftsmanship I had achieved was up to my standards. I was not expecting the responses I got. The questions started out simple enough, are all the parts 3D printed? Why does it print like that? How long did it take?

These questions, as simple as there were at first, usually started a much longer conversation of how everything was done. Most people seemed genuinely engaged and happy they asked. Some I think (hope) walked away with knowledge of something new to share with some one else. It was really great talking to people about something I was passionate about and seeing them getting into how it all worked. Some people knew how this worked and asked even deeper questions. 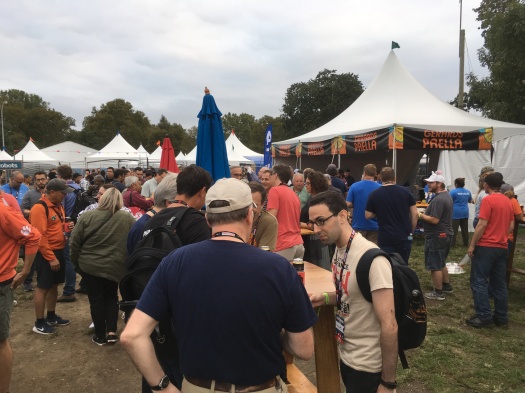 There were conversations not just about the trains, but how some of them remembered what is was like to live in the city when they were still rolling around in the subway system. On man brought his son over to look at the trains and after a short conversation about them it turned to his profession as a musician. It was a long conversation that  centered around his new found love of the ukulele and how he managed to pull off a one man show with it at a recent formal event.  Another women I talked to told stories of how her husbands’ love of train travel resulted in him being proud of buying sleeper tickets for a ride that were labeled “hard sleeper”. Which meant sleeping on a 1/2″ thick board covered in some sort of cloth that had not been washed since it was made with the heat of India adding to the comfort level.

Earlier in the day I was interviewed by two guys from South America that have their own maker YouTube channel. So I should be translated into Spanish at some part and show up on YouTube. I did see them later in the day on Sunday and they seemed wiped from all the filming they were doing.

On Sunday there was a pair of friends that came from the New York city Transit Museum. They were exited to see the trains and more than happy to geek out on the technical side of the real thing.  Most kids seemed to perk up when they turned towards my area and saw trains running around. One kid came by who was so stoked about them, if he could blow his lid like in the cartoons he would have. More impressively he could rattle off which train was which and which line they came from.

Finally on Sunday I had my wife release me from talking so I could walk around and see the rest of the faire with my kids. Getting away from the table for a while was nice, I got a break and my kids had the wide eyes when they got to see the Hand of Man pick up and drop cars. They both got to meet R2D2 and see a metal chicken drive around. The mayhem that a was abound in the power wheels go cart area keep both of them asking if we could build one for home. It must be made from a shopping cart or so I was told. Kermit the frog peddled by while we waited to do some soldering at the Google tent. What faire would not be complete with out a trip to the ice cream truck. Later I realized there was a good bit of stuff we missed but next year we will get to see more of it and 2 ice creams costed me as much as 2 half gallons from the grocery store.

There were a lot of things I was not expecting despite doing as much research as I could before hand. I didn’t realize how much talking I would/could do in one day about the same thing. I didn’t realize that I had skipped both breakfast and lunch on the first day. I didn’t realize how much adrenaline was keeping me upright and talking. I also didn’t realize how many crazy things were going on around me all day. Being in New York city by your self with out kids after a day at Maker Faire means you have two options at night, you could go out and enjoy the city or sleep. Sleep won every time, that and I am not 20 something anymore.

Overall I was glad I went. I am happy that I got to finish this project the way I had started it back in 2005. It was great to get the trains out of my own shop and see how excited people got at what they are and how they were made. It was great to see people walk away with a bit more knowledge about how a technology they might have only heard by name, and shown what it can really do.

I am excited to see how the next part of this project turns out. There was a great deal of interest in both the project it self and the possibility of being able to purchase them. So the next leg of this is just that putting them on line to sell. 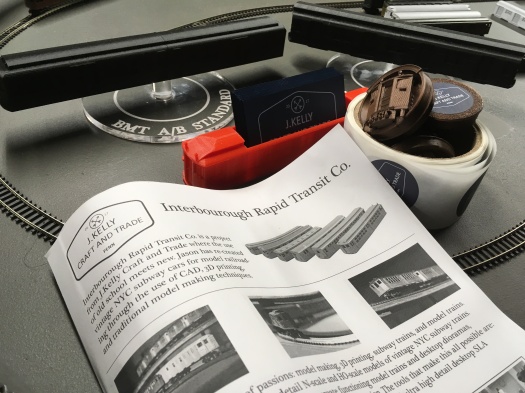 I don’t think I will show at Maker Faire again next year, but I  will be there next year to see what everyone else brings.